Due to the unhealthy air quality caused by smoke and ash from the Bobcat Fire, curbside services at both libraries have been suspended for the week of September 14 through 19. Phone reference at (626) 798-0833 and live chat at www.altadenalibrary.org are still available. Thank you for your understanding! 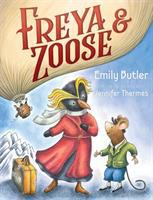 Freya has always craved--and feared--adventure. Traipsing all over the world is simply not what dignified rockhopper penguins do. But when she hears about Captain Salomon August Andree's hot-air balloon expedition to the North Pole, Freya packs her copy of Hints to Lady Travellers and hops on board. Only moments after leaving land, Freya discovers a fellow stowaway! Meet Zoose, the scrappy, uncouth mouse whose endless wisecracks and despicable manners make him a less-than-ideal travel companion. When the hot-air balloon is forced to land in the Arctic, these polar opposites must learn how to get along. Their very survival depends on it. Debut author Emily Butler spins wonder and whimsy and Jennifer Thermes contributes over fifty black-and-white illustrations to bring this enchanting friendship tale to life.

Freya, a penguin, and Zoose, a mouse, become friends while stowaways on Salomon August Andreé's 1897 hot air balloon expedition to the North Pole.