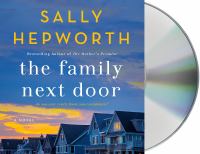 The family next door [sound recording] /

<p> "Perfect for lovers of Desperate Housewives and Big Little Lies, with a dash of Single White Female, this novel will stick with readers for a long time." -- Library Journal <br> <br> The Family Next Door is an audiobook about desperate mothers, secrets among neighbors, and things women keep hidden in a suburban drama from the author of The Mother's Promise. </p><p>Small, perfect towns often hold the deepest secrets.</p><p>From the outside, Essie's life looks idyllic: a loving husband, a beautiful house in a good neighborhood, and a nearby mother who dotes on her grandchildren. But few of Essie's friends know her secret shame: that in a moment of maternal despair, she once walked away from her newborn, asleep in her carriage in a park. Disaster was avoided and Essie got better, but she still fears what lurks inside her, even as her daughter gets older and she has a second baby. </p><p>When a new woman named Isabelle moves in next door to Essie, she is an immediate object of curiosity in the neighborhood. Why single, when everyone else is married with children? Why renting, when everyone else owns? What mysterious job does she have? And why is she so fascinated with Essie? As the two women grow closer and Essie's friends voice their disapproval, it starts to become clear that Isabelle's choice of neighborhood was no accident. And that her presence threatens to bring shocking secrets to light. <br> <br> The Family Next Door is Sally Hepworth at her very best: at once a deeply moving portrait of family drama and a compelling suburban mystery that will keep listeners hooked until the very last word.</p>

Small towns often hold the deepest secrets. Essie thinks she's buried hers, but when a mysterious new neighbor befriends her, Essie starts to think the woman may have ulterior motives.

Couples Fran and Nigel, Essie and Ben, and Ange and Lucas seem to have it all together. Happy marriages, thriving children, and as neighbors, they are the best of friends. But each family harbors its own secrets, which come to light when new neighbor Isabelle, who's single, shows up on the quiet cul-de-sac, bringing with her an air of mystery and intrigue. Isabelle takes a particular liking to Essie and the two quickly become best friends. Meanwhile, Fran is literally running herself into the ground, taking multiple runs daily. Ange is faced with a decision that no wife or mother wants to believe as her marriage to Lucas is put to the test. -Hepworth (The Mother's Promise) pens a work full of searing secrets and riveting realizations. Readers will be sucked in from the first page, as this fast-paced and alternating point-of-view chapters make it hard to put down. With jaw-dropping discoveries, and realistic consequences, this novel is not to be missed. VERDICT Perfect for lovers of Desperate Housewives and Big Little Lies, with a dash of Single White Female, this novel will stick with readers for a long time. [See Prepub Alert, 10/9/17.]-Erin Holt, Williamson Cty. P.L., Franklin, TN © Copyright 2018. Library Journals LLC, a wholly owned subsidiary of Media Source, Inc. No redistribution permitted.