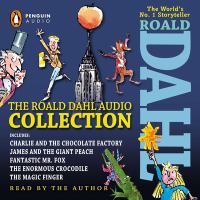 "Roald Dahl sometimes shared a tonal kinship with Ogden Nash, and he could demonstrate a verbal inventiveness nearly Seussian...[His] stories work better in audio than in print." - The New York Times <br> <br> <br> Roald Dahl's wickedly funny novels have turned him into the world's number 1 storyteller. In this collection five splendiferous stories are brought to life by the author himself.<br> <br> Charlie and the Chocolate Factory (Abridged)<br> Willy Wonka's famous chocolate factory is opening at last!<br> <br> James and the Giant Peach (Abridged)<br> A little magic can take you a long way<br> <br> Fantastic Mr. Fox (Unabridged)<br> Nobody outfoxes Fantastic Mr. Fox!<br> <br> The Enormous Crocodile (Unabridged)<br> This greedy crocodile loves to guzzle up little boys and girls<br> <br> The Magic Finger (Unabridged)<br> Horrible neighbors learn their lesson from a little girl with powerful magic!

Performed by the author.

Presents five of the author's most popular novels. Charlie and the Chocolate Factory (abridged): e gates of Mr. Willy Wonka's fabulous chocolate factory are opening at last and only five lucky children are allowed to enter. James and the Giant Peach (abridged): A young boy escapes from two wicked aunts and embarks on a series of adventures with six giant insects he meets inside a giant peach. Fantastic Mr. Fox (unabridged): Three farmers, each one meaner than the other, try all-out warfare to get rid of the fox and his family. The enormous crocodile (unabridged): The Enormous Crocodile is a horrid greedy grumptious brute who loves to guzzle up little boys and girls. But the other animals have had enough of his cunning tricks, so they scheme to get the better of this foul fiend, once and for all. The magic finger (unabridged): Angered by a neighboring family's sport hunting, an eight-year-old girl turns her magic finger on them.