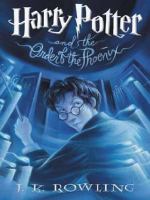 Harry Potter and the Order of the Phoenix /

There is a Door at the end of a silent corridor. And it's haunting Harry Potter's dreams. Why else would he be waking in the middle of the night, screaming in terror? Here are just a few things on Harry's mind: A Defense Against the Dark Arts teacher with a personality like poisoned honey. A venomous, disgruntled house-elf. Ron as keeper of the Gryffindor Quidditch team. The looming terror of the end-of-term Ordinary Wizarding Level exams...and of course, the growing threat of He-Who-Must-Not-Be-Named. In the richest installment yet of J. K. Rowling's seven-part story, Harry Potter is faced with the unreliability of the very government of the magical world and the impotence of the authorities at Hogwarts. Despite this (or perhaps because of it), he finds depth and strength in his friends, beyond what even he knew; boundless loyalty; and unbearable sacrifice. Though thick runs the plot (as well as the spine), readers will race through these pages and leave Hogwarts, like Harry, wishing only for the next train back. Book jacket.

Table of contents provided by Syndetics

Just in case you missed it in all the media, the fifth installment of the Harry Potter series is flying your way on June 21. It's one-third longer than Harry Potter and the Goblet of Fire, and Dumbledore promises to tell all. (c) Copyright 2010. Library Journals LLC, a wholly owned subsidiary of Media Source, Inc. No redistribution permitted.

(Intermediate, Middle School) This review is much like the proverbial tree falling in an uninhabited forest: unlikely to make a sound. But for the record, HP5 is the best in the series since Azkaban, and far superior to the turgid HP4. With Rowling once again following the formula of giving Harry's day-to-day troubles and preoccupations the same weight as the larger battle of good vs. evil, Harry, now a sullen fifteen, finds himself in the role of outsider. The adult wizards in the Order of the Phoenix prepare for the return of Voldemort without him; at Hogwarts, he is ignored by Dumbledore, banned from Quidditch, and--thanks to slanted press coverage--generally regarded as a liar and a ""weirdo."" A new Defense Against the Dark Arts teacher, backed by a Ministry of Magic in Voldemort-denial, begins taking over Hogwarts one repressive educational decree at a time, providing Rowling with the opportunity for some sharp-edged satire. This is one of the funniest of the books, with comic set pieces starring Uncle Vernon and Hagrid, and with Fred and George Weasley outdoing themselves in wickedly funny asides. But it is also one of the most unpleasantly aggressive: adults snarl at one another; Slytherins and Gryffindors seem perpetually to be insulting each other, and even come to blows. The plot doesn't bear close scrutiny, and the climactic confrontation between ""Dumbledore's Army"" (a group of Hogwarts students led by Harry) and a horde of Death Eaters is a banal shoot-'em-up scene with a little magic thrown in. The concluding wrap-up, though, in which Dumbledore explains it all to Harry (and to us), contains a revelation regarding Neville Longbottom that should keep fans fizzing with wild surmise until the next installment. HP5 remains a highly passive reading experience, with all the work done by the author and none required of the reader (viz. those omnipresent, ambiguity-leaching adverbs: ""'I'm not staying behind!' said Hermione furiously""). But tally the book's strengths and weaknesses as you may, the fact remains that Rowling has once again created a fully-fledged world, and for the experience of being there with Harry, HP5 can't be beat. (c) Copyright 2010. The Horn Book, Inc., a wholly owned subsidiary of Media Source, Inc. No redistribution permitted. All rights reserved.