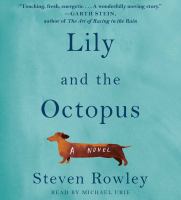 Lily and the octopus [sound recording] /

A national bestseller combining the emotional depth of The Art of Racing in the Rain with the magical spirit of The Life of Pi , " Lily and the Octopus is the dog book you must read this summer" ( The Washington Post ). <p>Ted--a gay, single, struggling writer is stuck: unable to open himself up to intimacy except through the steadfast companionship of Lily, his elderly dachshund. When Lily's health is compromised, Ted vows to save her by any means necessary. By turns hilarious and poignant, an adventure with spins into magic realism and beautifully evoked truths of loss and longing, Lily and the Octopus reminds us how it feels to love fiercely, how difficult it can be to let go, and how the fight for those we love is the greatest fight of all. <p>Introducing a dazzling and completely original new voice in fiction and an unforgettable hound that will break your heart--and put it back together again. Remember the last book you told someone they had to read? Lily and the Octopus is the next one. "Startlingly imaginative...this love story is sure to assert its place in the canine lit pack...Be prepared for outright laughs and searing or silly moments of canine and human recognition. And grab a tissue: "THERE WILL BE EYE RAIN " (New York Newsday ).

A young writer finds that his aging dachshund, Lily, has begun talking to him, just as a small octopus attaches itself to her head.

Screenwriter Rowley's poignant debut novel offers an anthropomorphic story that will be recognized by listeners who have faced a loved one's illness. Ted, lonely and single in Los Angeles, finds solace in his companion Lily, a dachshund. He raises her from a pup, and their lives are melded. Aging together, Lily and Ted chat, play Monopoly, and discuss cute boys. One day Ted notices something on Lily's head that resembles an octopus and wonders why he never noticed it before. Ted can't bring himself to say out loud the word tumor and calls the growth the Octopus-he even gets the vet to use the term. The Octopus, sarcastic and caustic, yet with a sly wit, won't leave. And thus begins a major battle that reaches epic proportions. Rowley captures with tenderness, humor, and creativity Ted's feeling of powerlessness, the nuances of his grief, and the fierceness people can summon when faced with an overwhelming foe. Michael Urie captures well Lily's manic yet innocent voice, as well as Ted's calmer tones and the Octopus's sly taunting. VERDICT Urie's skillful narration adds another dimension to this tale of loss of a beloved pet. Recommended. ["This funny and heartbreaking first novel will appeal to dog lovers": LJ 5/15/16 review of the S. & S. hc.]-Judy Murray, Monroe Cty. Lib. Syst., MI © Copyright 2016. Library Journals LLC, a wholly owned subsidiary of Media Source, Inc. No redistribution permitted.