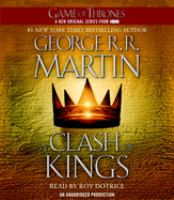 A clash of kings [sound recording] /

Two great leaders, Lord Eddard Stark and Robert Baratheon, who hold sway over an age of enforced peace, are dead, victims of royal treachery. Now, from the ancient citadel of Dragonstone to the forbidding shores of Winterfell, chaos reigns. Six factions struggle for control of a divided land and the Iron Throne of the Seven Kingdoms, preparing to stake their claims through tempest, turmoil, and war.

Lord Eddard Stark and Robert Baratheon are dead, both victims of royal treachery. Chaos reigns in the wake of their deaths as six factions battle for the Iron Throne of the Seven Kingdoms.