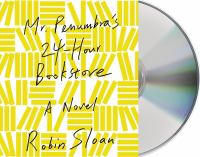 <p> A gleeful and exhilarating tale of global conspiracy, complex code-breaking, high-tech data visualization, young love, rollicking adventure, and the secret to eternal life--mostly set in a hole-in-the-wall San Francisco bookstore </p><p>The Great Recession has shuffled Clay Jannon out of his life as a San Francisco Web-design drone--and serendipity, sheer curiosity, and the ability to climb a ladder like a monkey has landed him a new gig working the night shift at Mr. Penumbra's 24-Hour Bookstore. But after just a few days on the job, Clay begins to realize that this store is even more curious than the name suggests. There are only a few customers, but they come in repeatedly and never seem to actually buy anything, instead "checking out" impossibly obscure volumes from strange corners of the store, all according to some elaborate, long-standing arrangement with the gnomic Mr. Penumbra. The store must be a front for something larger, Clay concludes, and soon he's embarked on a complex analysis of the customers' behavior and roped his friends into helping to figure out just what's going on. But once they bring their findings to Mr. Penumbra, it turns out the secrets extend far outside the walls of the bookstore.</p><p>With irresistible brio and dazzling intelligence, Robin Sloan has crafted a literary adventure story for the twenty-first century, evoking both the fairy-tale charm of Haruki Murakami and the enthusiastic novel-of-ideas wizardry of Neal Stephenson or a young Umberto Eco, but with a unique and feisty sensibility that's rare to the world of literary fiction. Mr. Penumbra's 24-Hour Bookstore is exactly what it sounds like: an establishment you have to enter and will never want to leave, a modern-day cabinet of wonders ready to give a jolt of energy to every curious reader, no matter the time of day.</p>

<opt> <anon I1="BLANK" I2="BLANK">HELP WANTED Late Shift Specific Requirements Good Benefits Now: I was pretty sure that "twenty-four-hour book store" was a euphemism for something. It was on Broadway, in a euphemistic part of town. My help-wanted hike had taken me far from home, and the place next door had a sign with neon legs that crossed and uncrossed. Inside: imagine the shape and volume of a normal bookstore turned up on its side. This place was absurdly narrow and dizzyingly tall, and the shelves went all the way up--five stories of books. I craned my neck back--why do bookstores always force you to do uncomfortable things with your neck?--and the shelves faded smoothly into the shadows of the ceiling in a way that suggested they might just go on forever. There were ladders that clung to the tall shelves and rolled side-to-side. Those usually seem charming, but here, stretching up into the gloom, they seemed ominous. I stuck to the front, where weak morning light pressed through the windows. The front of the store was almost all glass, bright clear panes set into a grid of black iron, and arched across them, written in gold, it said (in reverse) PENUMBRA'S TWENTY-FOUR-HOUR BOOK STORE Excerpted from Mr. Penumbra's 24-Hour Bookstore by Robin Sloan All rights reserved by the original copyright owners. Excerpts are provided for display purposes only and may not be reproduced, reprinted or distributed without the written permission of the publisher.</anon> </opt>

When unemployed web designer Clay Jannon applies for a job as night clerk in Mr. Penumbra's 24-Hour Bookstore, he finds a narrow, three-story shop where haphazardly arranged books must be accessed by ladders. Only an occasional customer visits, arousing Clay's curiosity. Helped by his techie friends, Clay uncovers a mysterious cult that is dedicated to solving a puzzle hundreds of years old. Ari Fliakos's narration convincingly captures the enthusiasm of the youthful narrator as well as the older Mr. Penumbra. An entertaining blend of old and new technologies, books vs. computers. Sloan's story, with its many references to a dragon trilogy, will appeal chiefly to young adults and those who read more for quirky plot than for character development. VERDICT Recommended for those seeking a light mystery that celebrates the digital age. ["Though the depiction of Google as a utopian meritocracy seems rather farcical, Sloan has created an arch tale knitting the analog past with the digital future that is compelling and readable," read the review of the New York Times best-selling Farrar hc, LJ 9/1/12.-Ed.]-Nancy R. Ives, SUNY Geneseo (c) Copyright 2013. Library Journals LLC, a wholly owned subsidiary of Media Source, Inc. No redistribution permitted.