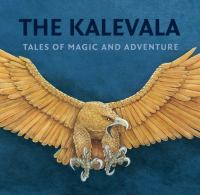 The kalevala : tales of magic and adventure /

The Kalevala, Finland's revered national epic, was compiled in the 19th century from ancient runes by Elis L nnrot, doctor and student of languages. It has since been translated into 45 languages and inspired numerous writers, artists and filmmakers, including J.R.R. Tolkien. Kirsti M kinen's prose retelling contains all the adventure of the original runic version and captures its beauty for children and adults alike. Its fantastic quests are brought to life for UK audiences by the faithful translation of Kaarina Brooks and Pirrko-Liisa Surojegin's stunning illustrations.

Presents an illustrated, English translation of the Finnish epic poem that follows the stories of a shamanistic hero named Väinämöinen, his young rival, and a handsome--but arrogant--man on their quests for revenge, truth, and love.