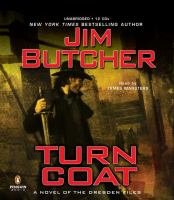 Turn coat [sound recording] : a novel of the Dresden files /

Harry must uncover a traitor within the Wizards of the White Council, keep a less-than-agreeable warden under wraps, and avoid coming under scrutiny himself. And a single mistake may cost someone his head--someone like Harry.

When fans of the immensely popular Dresden Files series last left the urban wizard in Small Favor, he was dealing with the aftermath of an adventure that might have left his best friend's life and family in danger. But Harry is back in fine form in his 11th outing, which begins with another, extremely unexpected White Council Warden begging for sanctuary at Harry's place and ends with several frightening revelations. Once again, Butcher's urban fantasy features excellent, irreverent humor, the return of favorite characters, and new challenges from unexpected foes. Harry's cop friend, the tiny but fierce Murphy, sticks by his side here, as do the werewolves Harry befriended in 2001's Fool Moon. Longtime readers will not be disappointed. Recommended for public libraries collecting the series; this is also a great book to plunge newbies into the dark, magical side of Chicago.-Stacey Rottiers, Warren Civic Ctr. Lib., MI (c) Copyright 2010. Library Journals LLC, a wholly owned subsidiary of Media Source, Inc. No redistribution permitted.