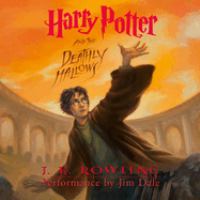 <p><br> It all comes down to this - a final faceoff between good and evil. You plan to pull out all the stops, but every time you solve one mystery, three more evolve. Do you stay the course you started, despite your lack of progress? Do you detour and follow a new lead that may not help? Do you listen to your instincts, or your friends?<br> <br> Lord Voldemort is preparing for battle and so must Harry. With Ron and Hermione at his side, he's trying to hunt down Voldemort's Horcruxes, escape danger at every turn, and find a way to defeat evil once and for all. How does it all end? Find out in Harry Potter and the Deathly Hallows. </p>

"We now present the seventh and final installment in the epic tale of Harry Potter"--Container.

Burdened with the dark, dangerous, and seemingly impossible task of locating and destroying Voldemort's remaining Horcruxes, Harry, feeling alone and uncertain about his future, struggles to find the inner strength he needs to follow the path set out before him.

(Intermediate, Middle School, High School) The wildly popular series ends with a bang as Harry Potter, the Boy Who Lived, abandons the familiar haven of Hogwarts to defeat Lord Voldemort once and for all -- or so he hopes. From a hair-raising escape at book's beginning to the monumental battle at its end that pits the Death Eaters against the Order of the Phoenix, Dumbledore's Army, and numerous magical creatures (including an unlikely contingent of house elves), Deathly Hallows breaks formula, eschewing the schoolboy setup of the past for a straight-up quest adventure devoid of Quidditch, detentions, and exams. On the run, now-seventeen-year-old Harry, Ron, and Hermione search out the Horcruxes, introduced in Book Six as the key to Voldemort's destruction. Meanwhile, Harry, distraught over his mentor Dumbledore's death, puzzles through the former Hogwarts headmaster's shady past and discovers a new means of defeating Voldemort: the Deathly Hallows, three legendary objects that together give their possessor power over death. As the book opens, Voldemort has begun to seize power in a silent coup: with discrimination codified, step by step, into law and critics swiftly ""disappeared,"" the resulting society is a familiar dystopic nightmare -- and Hogwarts is no sanctuary. Rather, with the still-enigmatic Snape installed as headmaster and several Death Eaters added to the staff, it is a youth prison and indoctrination center. Rowling pulls few punches in depicting this bleak landscape: torture, if not graphically described, is implacably present, and the body count climbs ever higher. Readers who grew up with the series will appreciate how it has matured, but younger newcomers may be overwhelmed by a level of violence and loss that far surpasses all previous volumes. Rowling obviously had a long eye for plotting: numerous minor personalities emerge from the woodwork to fulfill past foreshadowing, while others -- Ron and Neville Longbottom, especially -- finally come into their own. As for Harry, the boy hero flirts with darkness, casting Unforgivable curses with a feeling of ""heady control"" and ominously tempted by the promise of power that tainted Dumbledore. Ultimately, however, he is saved by his capacity for love and self-sacrifice, and it is here that Rowling's message rings loud and clear. Harry is consistently defined by his compassion; it can even be his (temporary) downfall, as when his choice to disarm rather than kill one of the enemy identifies him amid a cadre of decoys. But compassion is the quality that allows Harry to break the cycle of hatred between Muggle and wizard, house elf and human, and even Gryffindor and Slytherin -- and the ripple effects of this achievement are incalculable. Ravenous fans and higher-than-ever stakes aside, the book has its flaws. Rowling still discounts the ability of her audience to read between the lines and leaves no subtlety to the imagination (to a righteously angry Hermione, ""'Yeah,' said Ron sycophantically""); certain plot devices seem like hasty additions to the magical rulebook; and the scenes of conceptual exposition, particularly a plodding one that bisects Harry and Voldemort's final showdown, are poorly integrated, rarely sustaining tension. Nevertheless, Rowling fulfills the promise of earlier volumes, tying up loose threads, deepening character complexities to match Harry's evolving recognition of life's shades of gray, pulling out every emotional stop, and leading her hero into adulthood while still producing the most focused plot line and layered, heart-in-throat climax of the series. (Snape plays his part, and rather than resolving his character as pure good or pure evil, Rowling allows him a full measure of both and the internal conflict to match.) After all the adrenaline, an epilogue gently releases readers, shining a brief nineteen-years-later light on the aftermath for all involved that contains small, satisfying echoes of Harry's own first introduction to the wizarding world. It is unsettling to reach the end of a saga that attained such heights of cultural saturation; there's not enough action or bittersweet resolution in the world to prepare us for the finality of that last page turn, and readers will always want one more chapter, one more story, before leaving the universe of the book. Rowling gracefully acknowledges this ambivalence. The opening scenes of Deathly Hallows find Harry, for the last time inside the Dursleys' house at number four, Privet Drive, sifting through his belongings, recalling past escapades, and wistfully bidding goodbye to those who, like his parents and godfather, were lost to him. Readers will share his feelings of nostalgia in this triumphant farewell to the boy wizard. (c) Copyright 2010. The Horn Book, Inc., a wholly owned subsidiary of Media Source, Inc. No redistribution permitted. All rights reserved.