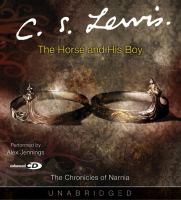 The horse and his boy [sound recording] /

In the third installment of C. S. Lewis' celebrated Chronicles of Narnia series, when young slave boy Shasta discovers his adopted father's plan to sell him to a British stranger, he devises an escape plan to acquire his freedom. A rarified talking war horse named Bree helps Shasta on his journey. As they venture towards Narnia, these two travelers encounter colorful characters and a motley assortment of adventures.

A boy and a talking horse share an adventurous and dangerous journey to Narnia to warn of invading barbarians.

This is an all-cast dramatization of the third book in Lewis's "Narnia" series. Those who have read all seven books will be better able to put this performance in context, but the uninitiated will enjoy this adventure tale in which, once again, intrepid children outwit nefarious grown-ups. Shasta is a young boy living in Calormene with a cruel man who claims to be his father. One night he overhears his "father" offering to sell him as a slave, so Shasta makes a break and sets out for the North. He meets Bree, a talking horse who becomes his companion. On their way they encounter Aravis, a high-born girl escaping an arranged marriage, and her talking horse. Despite their differences the children and horses learn to work together to reach the freedom they long for. In the meantime, they uncover a Calormene plot to conquer Narnia. The performances are energetic, and the characters easily distinguishable. This recording should not replace the book but rather should serve as an introduction to it. For family listening.ÄNann Blaine Hilyard, Lake Villa Dist. Lib., IL (c) Copyright 2010. Library Journals LLC, a wholly owned subsidiary of Media Source, Inc. No redistribution permitted.